Hello can anyone help with these horrible lighting artefacts I’m getting on all surfaces, even flat surfaces. Even when I use the highest bake settings. 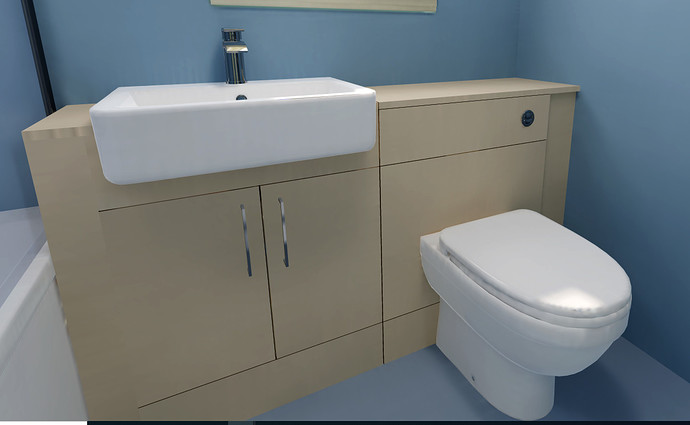 Hi there. I’d try modifying the ‘Flood dark limit’ filter in the Bake tab. Try increasing it to 0,04 - bake and see what happens.

@moominmomma, it looks that the denoiser was unable to remove the noise completely on some of the surfaces.

Hi Wojtek and Ville, thank you so much for taking time to help. I’ve spent the day experimenting with the bake settings. I’ve had some horrors! … But this is the best I’ve managed; not awful, but still the toilet has bad lighting, but only at the front!? I have a sky light, an Area light just inside the window, and a single spot above the bath. I’ve included the bake settings in the image. I also set the toilet custom lightmap settings to 200. I’ve checked smoothing on the model, and turbo smoothed to try and fix it but Ugh! Any ideas gratefully received!
H 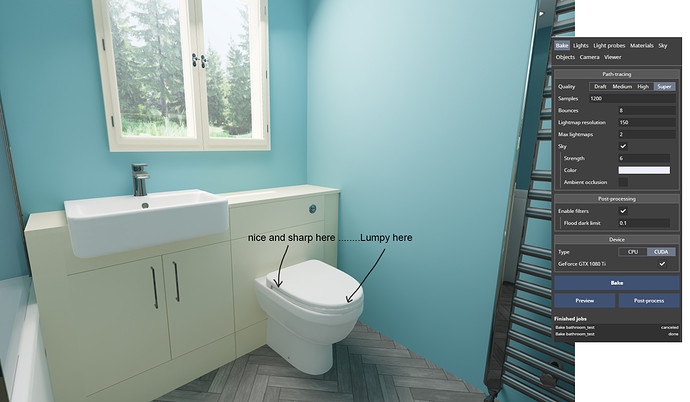 If you’d already raised Custom lightmap resolution for the cover to 200, and it wasn’t automatically lowered because of exceeding the Max lightmaps setting (you can check if it happened in the Objects tab), then unfortunately this seam cannot be improved.

It looks like there might be some overlapping or intersecting geometry in the darker places. Could you share a link to the scene with us via the forum’s PM, so we could take a closer look at the defects?